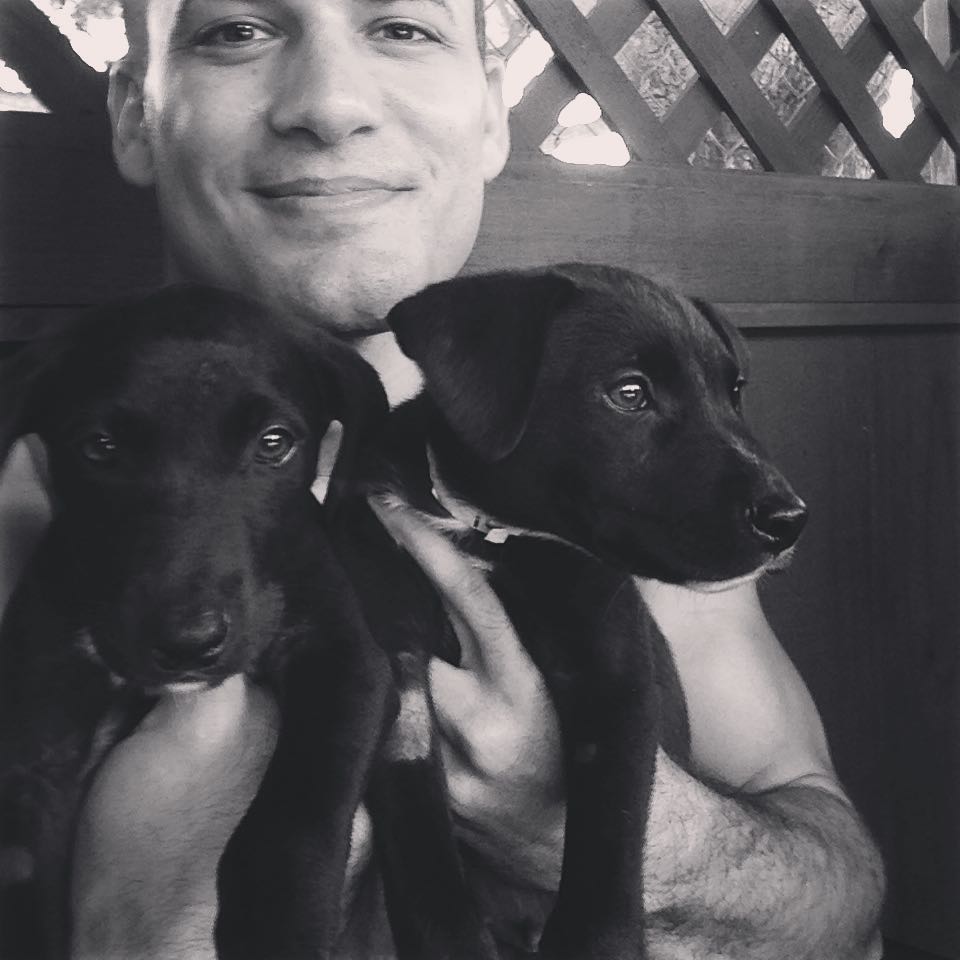 In December 2015, a few months before this picture was taken, I quit the antidepressant medication I had been taking and posted this shot to Facebook and Instagram next to this quote: “Looking back over a lifetime, you see that love was the answer to everything.” The post, naturally, got lots of “likes,” a few “loves,” and a bunch of comments like “My heart just skipped a beat. They’re soooo freaking cute!” and “Cuddle puddle commence xx” and so on and so forth. Meanwhile, 2016 had been, overall, the most hellish, beautiful, and inexplicably transformative year of my life to date. When I posted this picture to social media with the gushy Ray Bradbury quote I was in the midst of walking through this beautiful transformational hell, like some kind of modern Dante as my little runt-of-the-litter band of serotonin neurotransmitters screamed for reinforcements into a janky combat radio while HQ was out for lunch smoking fat Cubans, chasing tail, and drinking scotch.

When I posted this picture to social media, what I didn’t say was how every day my heart ached and my gut churned with gnawing anxiety for no good reason. What I didn’t say was that I was scared the withdrawal would never end–that this was my permanent, unmedicated state of consciousness–that the bone-deep invisible pain would carry on forever, haunting my mind and cutting my life to jagged shards in the process.

Our culture teaches us that to be anything but strong, healthy, wealthy, and (let’s not forget, most importantly) sexy–at all times–is shameful. We’re taught, in that lovely omnipresent subliminal message kind of way, that to live with any shade or degree of mental unwellness means to be irreparably flawed and doomed to a life of side-effects and secrecy. That oppressive cultural imperative goes for all of us in the modern western world regardless of gender, but becomes even more demanding for men. As a man, I’m not supposed to have many emotions beyond pissed off & “stoked”–and in some of the spiritually bypassing “ultra-spiritual” communities I’ve encountered, anger is out of vogue, too. “Oh Shiva, I spilled my kale-tempeh kombucha all over your laptop? Don’t be mad, bro… Just be here now…No I don’t have any money for you.”

Straight men, particularly, are discouraged from expressing emotions that–Lord of Light help us–could be perceived as “weak” or–gasp!–“gay.” The problem is, this kind of emotional straight-jacketing forever freezes a man’s emotional development to the point that he risks always walking through the world as a confused, heart-disconnected boy masquerading in a man’s body.

Well, in honor of the last day of Mental Health Awareness Month, I’m giving a big proud hairy Jewish middle finger to all that backwards bullshit. I’m adding my voice to the growing choir of courageous souls who are talking about their experiences with mental health crises and challenges publicly. Why? Simple. Because fuck the stigma, fuck the shame, and fuck the fear that keeps so many of our planet’s brightest, most creative, compassionate humans suffering in silence & taking their lives in increasingly record-breaking numbers. Because expressing ourselves authentically–in times of great joy and in great sorrow, is crucial, & transcends all political, religious, and sexual-orientation divides–especially when it’s scary, uncomfortable, controversial, and unquestionably important in creating a better world for everyone. It’s far from weak–it’s one of the bravest things I can imagine.

Finally, today I’m talking about mental health for the same reason I share anything to social media–the sex appeal, obviously! Nothing drops panties faster than a man talking about his experiences with depression & anxiety, am I right or am I right? Throw your panties on stage from down there in the comments section if you agree.

At this point, I’d like to say that if any of this is hitting home with you, for yourself or someone you love–if you can relate and resonate with what I’m saying here a little more than you might wish–I want to say that not only are you not alone, but I’ve come to believe to the core of my being that as awful and debilitating as it has been at times, I’ve waded through the darkness enough times to say that depression has happened for me, not to me. I am not defined by my past dances with depression or forever doomed to relive them over and over again in ever-tightening circles of misery. Rather, as I’ve let depression be the wise, if not harsh, sensei that it really can be, it has softened my heart, clarified my priorities, and really just all around lit a fire under my ass to be a more empowered, resilient, conscious, heart-connected, badass spiritual being having a human experience.

At some point in 2016 after praying, fighting, digging, and yes–crying–my way through so many layers of pain and sorrow, and honestly wondering if I would ever feel whole again, I made a pact with whatever Gods of the Multiverses might be listening. I vowed that if and when I made it through my darkness, I would help guide others out of their own. I would be a beacon of hope for wayward souls; a wounded-healer; a voice for those stifled by the demons I’d come to know by name. Because in my own quest for mental unfuckablewithness, I had also come to know by name heroes whose own sojourns with Sensei Depression shaped them into some of the most legendary transformative leaders of their times–names like Abraham Lincoln, Mahatma Gandhi, Martin Luther King Jr., Winston Churchill… and let us not forget the man whose WWF beatdowns you could always smell cooking–Dwayne “The Rock” Johnson.

The plan to become a wounded-healer gave me strength: it gave me something bigger than myself, and a lot of “someones” to fight for. I began to research grad school options, and came across the California Institute of Integral Studies’ Somatic Psychology program. The program sounded like it had been designed for me personally. My entire life I have been drawn to physical expression as a means to process and transmute my sometimes overwhelming emotional body. From Brazilian Jiu Jitsu to Acro Yoga, Ecstatic Dance to Massage Therapy, Fire Dancing to Thai Kickboxing, and Improv Comedy to strumming away and singing my heart out with a little ukulele, somatic (body-based) expression has always been the North Star guiding me home to myself.

Ultimately, depression has been a purifying and cleansing agent in my life, and a catalyst for me to really listen to my soul’s deepest longings, and then actually go after them with a passion. Anything heavy or dissonant inside demands to be unloaded or addressed. Wherever I’m out of integrity, my emotional sensitivity lets me know deeply, loudly, and often painfully. Our bodies know something that all our oversized prefrontal cortex intellectualization can’t suppress: pain demands to be felt. And if we listen mindfully to that pain, it will whisper secret laws of the universe into our souls’ ears–secrets like: if I ignore, depress, and suppress my loud thoughts and feelings long enough, I will eventually find myself depressed. See what I did there?

These days, whenever I’m holding on to resentment, blame, shame, guilt, sadness, or anger, the threat of depression makes it clear to me that I can either hold onto thoughts, feelings, and beliefs about how the world was unjust to me and someone else is to blame for my unhappiness, or I can find ways to take responsibility for the cards I’ve been dealt, express myself, and be happy.

This post is the first in what will be an ongoing series of stories from my life that I’ve been calling, in standard verbose & melodramatic fashion “Shadow Slaying: Tales From The Abyss (Depression, Anxiety, Self-Annihilation, Love, & The Journey Back)”. It’s very, very tempting to leave you with the impression that in 2016 I figured it all out. In our next installment of “Miller Talks About His Feelings and Shit,” (hey, that’s pretty good, maybe I should just call it that) I’ll be filling in the gaps. I’ll detail the parts of the story that some people won’t want to hear–because it doesn’t vibe with their philosophies or fit into the framework of Hollywood endings where the hero rides off into the sunset on horseback to live it up with his bikini babes sipping Mai Tais on a beach somewhere like Maui, and everything fades to a comfortable, bow-tied black, and then the credits roll. Because that’s not how the story goes. At least not completely–not yet. It’s much more interesting and ultimately satisfying than that, if I may say so myself.

What I can conclude with today is that I now see my journeys through depression for the profound gifts they’ve been. They’ve taught me more than anything else possibly ever could just how insightful and on point Mr. Bradbury’s gushy quote is–because looking back over my lifetime, love really has been the answer to everything. Love for myself, love for my friends and family, love for strangers on the street having a rough day or year or life, love for my demons, love for the entire messy-wonderful spectrum of human emotion, and love for all of us striving to make the most of our one wild and precious golden ticket to the greatest game the universe has ever known–the human experience.

And it’s that same love that now drives me forward towards making good on that pact with the multiverses I mentioned earlier. So for anyone living with less than perfect mental health or anyone who loves someone who’s affected by mental illness, I say to you… Onwards, together.

With So Much Heart, Soul, & Aloha,