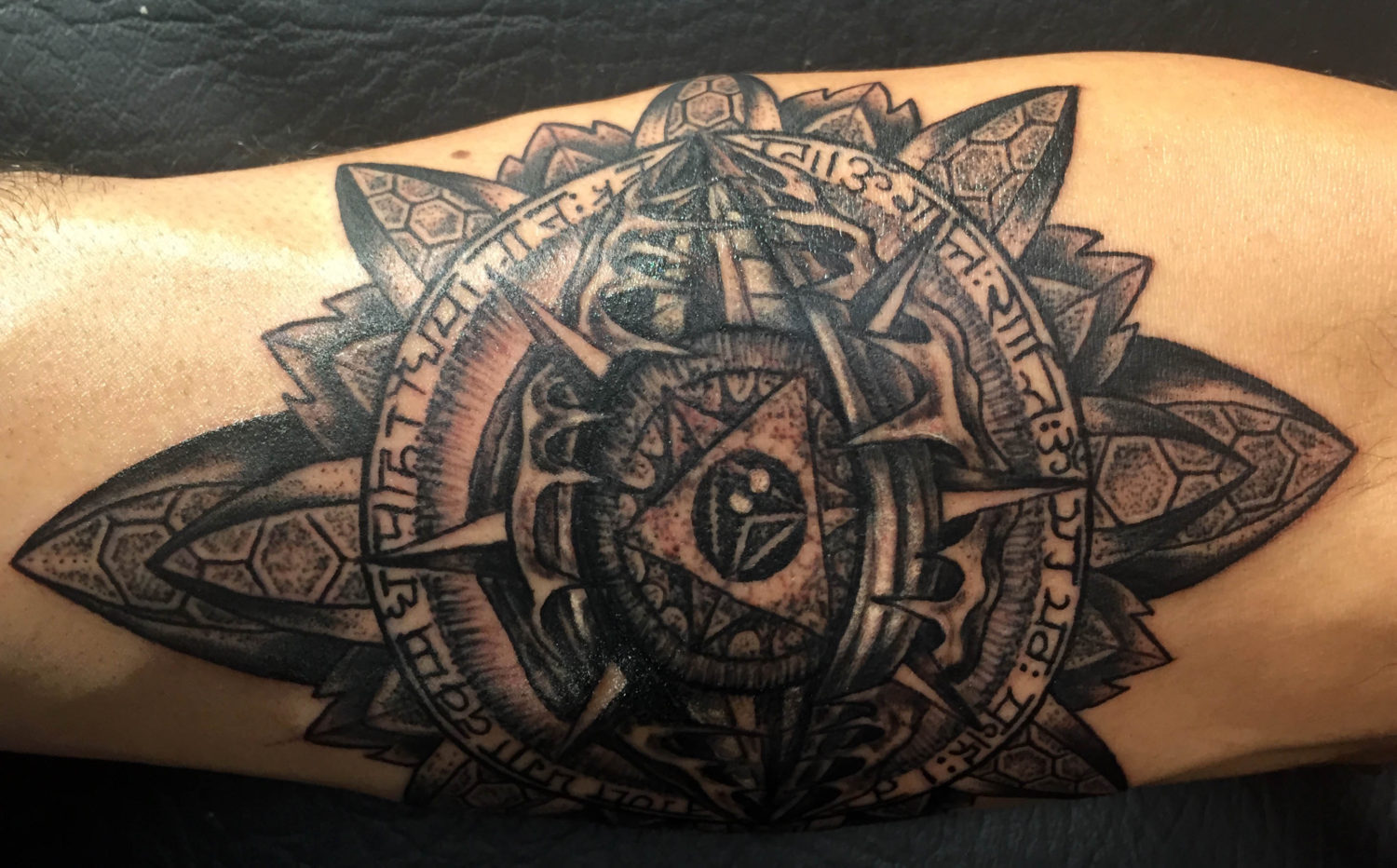 One Saturday morning I sat down with yogi ink artist Rachel Gonzales–forcibly surrendering my forearm to her jackhammering ink gun. The process began one auspicious night in November during an especially vibrant full moon on the Hawaiian island of Maui. As I was drifting off to sleep I watched the full moon through a skylight. As I warped into dream-world, that burning image of the moon followed me, and the seeds of this ink were born. When I woke up, I rushed for a pen, pulled a blank sheet from the printer, and let my hand dance across the page.

Like any artwork, the art grows with me, and I with the art. Time spirals on, and I find ever-expanding stratospheres of meaning. With that caveat, at Rachel’s request I have put together a little taste of the piece’s current significance to me, as of this writing.

The actual process of receiving the tattoo served to further burn the spirit of the creation into my consciousness. Make no mistake; it fucking hurt. At some times more than others. My mind vacillated between serene zen-like acceptance of the pain to recalcitrant negativity, and I found myself repeating motivational mantras to silence that voice: “I can. I will. I am love. I am light. I can. I will…” We listened to Tipper, a Maui local and friend of Rachel’s, for the entire session, a tiny Chihuahua named Obie who I was dog-sitting held sweet space for me patiently in the corner, and Rachel and I both entered a kind of flow-state trance colored by flavors of pain, awe, focus, resolve, reverence. It was pretty much like childbirth, as I understand it, with less blood and screaming. After the outline, she started from the outside and worked her way in, at a crescendoing pace marked by the rhythmic mechanical buzzing of the ink-gun, all the way to the center of the piece. From the outside in:

It’s a classic image. Through the layers of mud, muck, and murky stale water rises the lotus blossom, patiently feeding off the grime of its environment, chasing the sun, stretching, growing, always reaching for the light. Then, in a moment of triumph, it unfolds its petals in glorious celebration, as if to say my magnificence will not be contained!

So to me, the lotus flower petals symbolize the beauty that arises from our struggles through hardships, difficulties, obstacles, and adversities of all kinds. This is the story of the human spirit. It’s like this Maya Angelou poem that I love [abridged]: You may trod me in the very dirt / But still, like dust, I’ll rise. / Just like moons and like suns, / With the certainty of tides, / Still I’ll rise. / Out of the huts of history’s shame / I rise / Up from a past that’s rooted in pain / I rise / Leaving behind nights of terror and fear / I rise / Into a daybreak that’s wondrously clear / I rise / Bringing the gifts that my ancestors gave, / I am the dream and the hope of the slave. / I rise / I rise / I rise.

Bees are really cool. They can intuitively calculate angles and can even factor in the curvature of the earth when communicating directions to one another through elaborately choreographed dances. I’ve been fascinated by bees since I was a kid; I remember catching them in mason jars from blooming flower gardens and being completely captivated as I watched them buzz around. The fascination was two-fold, I think: first, I had a learned reverence for the ferocity of their painful sting–and second, when I released them they always picked up where they left off–they had an unspoken purpose. They had a shared purpose. From bees I learned to admire the power of a shared purpose.

Honeycomb is the foundational structure of a bee hive. Its basic unit is a hexagon of wax. Bees use it to store their most precious creations: honey & eggs. Of all the possible shapes for honeycomb, hexagons divide up the space using the smallest wall area, and thus, for a honeycomb, the least wax. So the honeycomb reminds me to build efficiency, elegance, and shared purpose into my life as much as possible. To me honeycomb represents the genius of nature, teamwork, family, efficiency, and work ethic.

Since having the ink done, the significance of the sacred devanagari-written Gayatri Mantra has grown with me the most. I chose the Gayatri Mantra intuitively, spontaneously, and instinctively, as we were finalizing the tattoo sketch. Devanagari is a sacred calligraphic language of ancient India and Nepal. Because it’s so ancient, there have been many translations and interpretations of the Gayatri Mantra. My favorite one goes something like this:

May we meditate on the divine radiance of our inner light.

May we revere the Creator, from whom all come, to whom all must return.

May s/he enlighten our minds, and inspire our love.

The mantra represents to me divine connectedness, gratitude, love, hope for humanity.

Here’s a beautiful recitation of the mantra, by Deva Premal: https://soundcloud.com/spiritfestival/gayatri-mantra-deva-premal

So much of human life is about consumption, and being at the top of the food chain, that many of us forget we’re inevitably part of the cosmic composting cycle too. The venus fly trap is a perfect symbolic reminder of this. It’s a carnivorous plant: a plant that eats flesh. To me, there’s profound balance, and even comfort, in this idea. The jaws remind me: be humble, be grateful. Someday you’ll be plant food, too.

The Compass & Star of David

A reminder to always remember my true north, and to remember where I came from in order to know where I’m going, the six pointed compass also doubles as the Star of David, reflecting my Ashkenazi Jewish ancestry.

The merkaba is a very sacred shape with ancient origins: in Hebrew it means chariot of God, and is originally found in the Bible in the book of Ezekiel. It consists of two pyramids superimposed upon each other. It is said that one of the pyramids points towards the heavens, the other toward the earth. This contrast is akin to the yin-yang of Chinese symbolism. It represents non-duality–the divine interdependence & interconnectedness of seemingly opposing forces. Masculine and feminine. The heavens and the earth. As above, so below. As within, so without. In sacred geometry, the pyramid, or tetrahedron, represents the balance between the physical and spiritual realms. The perfectly balanced merkaba is a symbol of universal balance, stability, protection, & harmony.

I am endlessly fascinated by eyes. For me, they are the windows to the soul. Within their depths & layers, I see galaxies unfolding. A macrocosm lives within each of these divine microcosms. Each is completely unique, and yet I see more similarities than not, across genders, cultures, and belief-systems. Each is beautiful in its own way. Each imparts an other-worldly, mystical feeling when I gaze deeply.

And then it was finished.

Something I love about the tat, though, is that everyone sees something a little bit different in it upon first look. It’s like those Rorschach ink blots that psychologists used to use to figure out how crazy you were. I’ve heard everything from “Dream Catcher” to “Spaceship.”

When human beings lose their connection to nature, to heaven and earth, they do not know how to nurture their environment or how to rule their world – which is saying the same thing. Human beings destroy their own ecology at the same time that they destroy one another. From that perspective, healing our society goes hand and hand with healing our personal, elemental connection with the phenomenal world. -Chogyam Trungpa Rinpoche (Shambhala: The Sacred Path of the Warrior)

A big “Mahalo!” to Rachel Gonzales of Exotic Eye Tattoos.