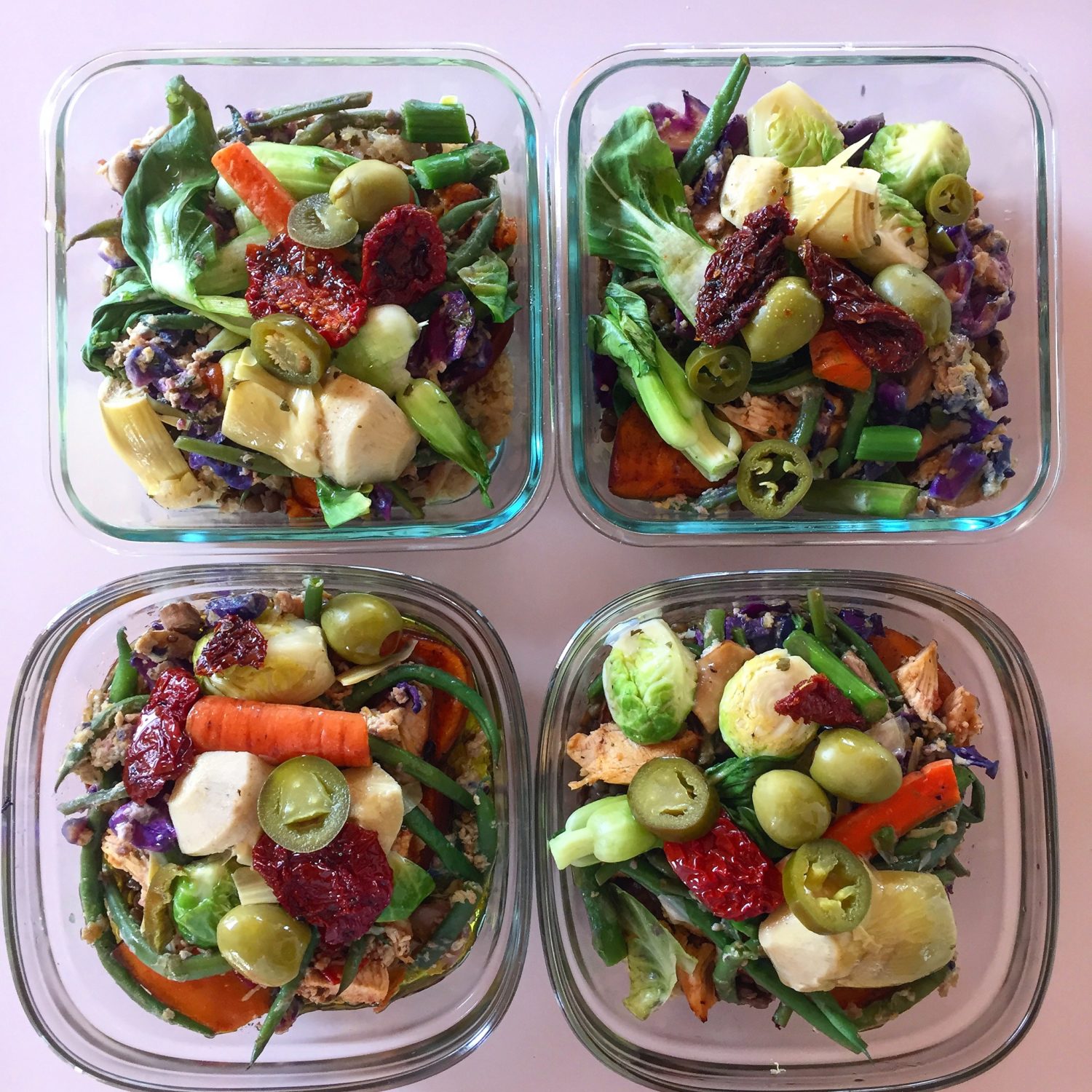 Not only are Maui Meals delicious as hell and great for fat loss, but they actually contain at least a dozen nutritious ingredients that are clinically proven to have significant cancer fighting properties. I pulled together some research from good sources around the web describing the anti-carcinogenic effects of 12 staple ingredients of the meals. Whether you sign up for one of our fully customizable weekly delivery meal prep plans on Maui or not, everyone would benefit from adding these superfoods to their diet.

A battle with cancer, for patients and the ones who love them, is often scary, confusing, disheartening, frustrating, humbling, and heart-breaking. I also know from personal experience that when we overcome health crises we are like the iconic lotus flower growing through the mud–we come out more radiant than ever, and stronger–if not physically, then mentally, emotionally, and spiritually.

Healthy eating is a bedrock for healthy living, and as a foodie, health nut, guy who cares, and budding entrepreneur, it has been very rewarding to turn my personal weekly meal prep into a little business on Maui that prepares and delivers healthy tasty meals all over the island.

Here are just a dozen of the superfoods found in Maui Meals.

A recent study identified a number of phenolic compounds in quinoa that have demonstrated anti-cancer activity in preclinical studies. Another component of quinoa, saponins, are used in the clinical setting in combination with chemotherapy to enhance its effectiveness. – EatToBeat.org Sweet potatoes are not just packed with nutrition but may also have special cancer-fighting properties. In 1931, a unique protein was discovered in sweet potatoes. It turns out that 80% of the protein in sweet potatoes is a type of protease inhibitor with potential anticancer effects. These proteins were originally tested against leukemia and appeared to suppress the growth of leukemia cells in a petri dish. – NutritionFacts.org With their abundance of phytochemicals, vitamins, minerals, and dietary fiber, it’s hardly surprising that numerous studies have reported a strong connection between greater intakes of lentils and a lowered risk of various cancers. In a study published in the International Journal of Cancer, researchers assessed the relationship between dietary flavonol intake and breast cancer risk in more than 90,000 premenopausal women, between the ages of 26 and 46, over an 8-year period. Consuming at least two servings of lentils per week was associated with a 24% reduced risk of breast cancer compared with those who ate lentils less than once a month. In a separate study, Norwegian scientists analyzed legume intake in 3,539 cancer cases and 2,032 controls. They uncovered an association between lentil consumption and cancers of the upper digestive tract. Higher intakes of lentils decreased the risk of mouth/throat, esophagus, and larynx cancers by 51, 48, and 37%, respectively. – Life Extension Magazine Beets are a great nutrient-rich vegetable with low calorie content despite their sweet taste. They are an excellent source of folate, a B vitamin that is heart-healthy and, because of its role in producing and repairing DNA, seems to be part of our anti-cancer arsenal, too. The red color comes from compounds called betalains, which laboratory studies suggest could be both heart- and cancer-protective. In animal studies, beets seem to inhibit carcinogen formation and increase production of immune cells and body enzymes that help fight cancer development. – American Institute for Cancer Research “Many studies in cell culture have shown that ginger is an anti-inflammatory,” says study researcher Suzanna M. Zick, ND, a research assistant professor at the University of Michigan Medical School, Ann Arbor.

Other studies in mice and rats have shown that ginger may help prevent the formation of tumors when it’s fed to the animals exposed to a chemical that causes colon cancer. – WebMD

A new study reveals ginger contains a pungent compound that could be up to 10,000 times more effective than conventional chemotherapy in targeting the cancer stem cells at the root of cancer malignancy. – FoodRevolution.org The National Cancer Institute reports that “During food preparation, chewing, and digestion, the glucosinolates in cruciferous vegetables are broken down to form biologically active compounds such as indoles, nitriles, thiocyanates, and isothiocyanates (1). Indole-3-carbinol (an indole) and sulforaphane (an isothiocyanate) have been most frequently examined for their anticancer effects.

Indoles and isothiocyanates have been found to inhibit the development of cancer in several organs in rats and mice, including the bladder, breast, colon, liver, lung, and stomach (2, 3). Studies in animals and experiments with cells grown in the laboratory have identified several potential ways in which these compounds may help prevent cancer: Spinach is rich in lutein and zeaxanthin, carotenoids that remove unstable molecules called free radicals from your body before they damage it. They’re found in spinach and other dark green leafy vegetables, and some studies show they could protect against cancer of the mouth, esophagus, and stomach. – WebMD.com Cabbage is a potent medicinal food that plenty of research shows prevents cancer, in large part due to its high concentrations of antioxidants, anti-inflammatory compounds and glucosinolates. – Mercola.com

Cabbage and its cousins may strongly protect against cancers of the digestive system, such as the tongue, lip, oral cavity, esophagus, and colon, according to researcher Lenore Kohlmeier, a professor of nutrition and epidemiology at the UNC School of Public Health and Medicine. – National Institute of Health – Eat Cabbage to Fight Cancer The American Institute for Cancer Research writes, “Researchers are studying a variety of substances in garlic for their potential health benefits and anti-cancer activity. Garlic contain allyl compounds that are responsible for its odor and flavor.

Additionally, the National Cancer Institute at Cancer.gov reports that “Several population studies show an association between increased intake of garlic and reduced risk of certain cancers, including cancers of the stomach, colon, esophagus, pancreas, and breast. Population studies are multidisciplinary studies of population groups that investigate the cause, incidence, or spread of a disease or examine the effect of health-related interventions, dietary and nutritional intakes, or environmental exposures. An analysis of data from seven population studies showed that the higher the amount of raw and cooked garlic consumed, the lower the risk of stomach and colorectal cancer.” While medicinal mushrooms have been used in China and Japan for more than 3,000 years to boost immunity and fight diseases such as cancer, only in the last decade has their power begun to be recognized in the United States.  In more scientific terms, a number of compounds in fungi have been found to stimulate the function of the immune system, inhibit tumor growth and boost intestinal flora.  Particularly, mushroom substances called terpenoids help kill bacteria and viruses and exert anti-inflammatory effects, while complex chain-like sugars called polysaccharides have been shown to exert antitumor and immuno-stimulating properties. Pleurotus species, such as eryngii, associated with anti-cancer activity, positive effects on the immune system, and anti-viral, antibiotic and anti-inflammatory activities.  This might be due, in part, to a key active compound found in king oyster mushrooms known as beta-glucans. – Health Benefits of Hamakua Mushrooms “‘We found onions are excellent at killing cancer cells,’ said Murayyan. ‘Onions activate pathways that encourage cancer cells to undergo cell death. They promote an unfavourable environment for cancer cells and they disrupt communication between cancer cells, which inhibits growth.’ There are many other powerful polyphenol-type antioxidants found in artichokes that researchers believe can contribute to the prevention and management of prostate cancer, breast cancer, and leukemia. Studies have shown that the antioxidants rutin, quercetin, and gallic acid found in artichoke leaf extract are able to induce apoptosis (cell death) and reduce the proliferation of cancer cells. – Life Extension Magazine